In the above image one can see the big hand which represents “U.S. Immigration” trying to remove the Latino immigrant from the ladder, where he was simply trying to grab some fruit, probably to feed his family.  This proves that Latinos do not have anything but good intentions by coming to the United States, they only want a better life for themselves and for their family, which is shown through the immigrant trying to grab a piece of fruit off of the tree.  I think the tree symbolizes the immigrants innocence, and that the U.S. Immigration system is trying to take away their innocence by painting this horrid picture that all immigrants are out to steal Americans jobs. 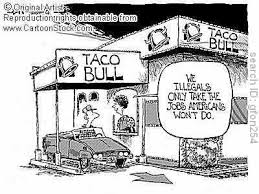 In the above image one is able to see the sign that says, “We illegals only take the jobs Americans won’t do”…basically this is a plea because the Latino community is saying yes, we do work in the United States, but we end up doing the jobs that citizens wouldn’t take anyway, and for cheaper pay.  It’s interesting that the restaurant sign reads “Taco Bull” as opposed to “Taco Bell”, insinuating that the ridiculous protests against Latin immigration is complete bull.

This quote is also taken from Mohr’s short story, “Nilda”.  One can infer that the mother was getting choked up while taking to her daughter about this intimate topic through the use of the ellipses which signify pauses while she was speaking.  This quote further demonstrates the amount of love Nilda’s mother has for her, and also for all of her children.  Through Mohr’s diction one can understand the strong desire for Nilda’s mother to see her youngest daughter succeed, “[…] hold on, guard it.”

“You are a woman, Nilda. You will have to bear the child; regardless of who planted the seed, they will be your children and no one else’s.”

This quote is taken from Nicholasa Mohr’s short story, “Nilda” and in this particular point her mother is explaining to her youngest daughter how much sacrifice is involved in bearing children..  The mother illuminates the fact that because she’s a woman, she has certain expectations she needs to live up to, which includes bearing children.  An interesting idea that she brings up is that “[…] regardless of who planted the seed” she will be their mother, simply saying that a lot of men won’t stick around and be decent fathers like they should, so all of the weight, and both sides of parenting, mothering and fathering, will fall upon the mother.

In this video we see hundreds of students who willingly took off school to protest against the government who was trying to make immigrants into some kind of criminal.  As stated, they are not criminals, they just “want a better life for our families”.  It’s sad that we say we have come so far as a country in not being prejudice, but judging from this video, we still have a long way to go.  Latinos are people too, they just want to come to this country in search for a better life, and there’s nothing criminal about that…what’s criminal is pushing them away.

Starting with the first day of Global Literature: Latino Literature I was highly intimidated due to the large volume of work that was required for this class.  I can remember looking at the syllabus and hearing Professor Alvarez talk about the class and thinking, “Oh my gosh. What did I get myself into.”  Professor Alvarez did make it a point to say that all of this work would seem like a lot, but it’s all preparation for your final paper, so it would ultimately be helping us.  I didn’t look at all of the assignments in this positive light until about the third to last week of class when I started organizing a large portion of my paper and realize how much valuable information was available to me due to all of the blogging and response papers we handed in.  Professor Alvarez was a stickler when it came to MLA formatting, but I can see why now, and it made me a better writer.  This class taught me not to be afraid of a challenge, and how to cite with precision.

In this essay I will be illustrating the pressures Latina’s feel to immigrate to the United States to ensure a better life for themselves and for their family.  Often times Latina’s pry themselves away from their home country and families to search for a better, more secure job, but sometimes the Latina’s are placed in horrific situations.  In “A License to Abuse” by Michelle Anderson, some instances illustrate that Latina immigrants will marry a man who is a citizen of the United States just to receive citizenship herself, but the men frequently abuse their power and take advantage of the women’s situation.  In “Nilda” by Nicholasa Mohr one can see a mother begging her daughter to stay in school and create a life for herself because as the mother learned in her life, no man is going to take care of you, you need to take care of yourself.  Even after some Latina’s do make it to the United States, they have to endure jobs that other American citizens wouldn’t take.  For example, in “I’m Here, but I’m There”: The Meanings of Latina Transnational Motherhood” by Pierrette Hondagneu-Sotelo and Ernestine Avila, the article explains that some Latina mothers who emigrate from their home countries come to the United States and work as a nanny.  Imagine taking care of other people’s children while you are thousands of miles away from your own.  After suffering from several of these hardships, it is understandable that one might be angry towards the United States as a whole which is evident in  Jose Davila Semprit’s “The United States”.

“They sew garments on industrial sewing machines at home and incorporate their children into informal vending to friends and neighbors, at swap meets, or on the sidewalks. They may perform agricultural work alongside their children or engage in seasonal work ; or they may clean houses when their children are at school or alternatively, in corporate their daughters in to paid house cleaning”

The quote above shows that Latina women understand their need to work as women and often,  as single women, but they also know how crucial it is to spend time with their children.  These working mothers found ways to ensure that they’d be able to work and have enough money to make ends meet to feed their children, but also to be around for their kids.  Some mothers choose to work alongside their children while house cleaning, or doing farm work, while others create a small business type set up from their homes where they make clothing using a sewing machine and have their children sell them to people they know in the neighborhood.  In any of these ways the children are at the very least benefitting from being around their mothers, someone who will care for them and nurture them, while at the same time learning a trade they could pick up when they’re of age.

“Yet, many working women-including Latina women-hold the cultural prescription of solo mothering in the home as an ideal.[…] . It is not only White, middle-class ideology but also strong Latina/o traditions, cultural practices, and ideals-Catholicism, and the Virgin Madonna figure-that cast employment as oppositional to mothering.”

This theory of Latina women, but also all women, of having to come home for a second shift is reality.  This theory is a new phenomenon that was caused by the industrial revolution where a surplus of jobs were created, but also being that things have gotten so expensive due to inflation, it forces both parents to go into the work field.  One thing that has yet to change is the fact that when a man comes back from work they aren’t expected to vacuum the floors, clean the dishes, prepare dinner, or put the kids to bed, but the women are.  Women may have had an additional responsibility added onto their list of tasks, a job, but that didn’t make their “womanly duties” disappear.  For the women whom are mentioned in the quote, it’s apparent that sometimes men aren’t even in the picture so they are forced to be both the mother and father to their children.  Latina women are often raised in an environment of which teaches them to cater to the men in their family, whether they see their own mother’s catering to their fathers, or grandmothers serving their grandfathers, this paints the picture that this is the right way, and the only way to treat a man, to serve him.

“Latina immigrant women who work and reside in the United States while their children remain in their countries of origin constitute one variation in the organizational arrangements, meanings, and priorities of motherhood.  We call this arrangement “transnational motherhood”[…]”

Latina women from all different countries migrate to the United States in search of a better life for themselves, and for their family.  In this particular article they discuss how Latina mothers are practically being forced to migrate to the United States to make a better living, but what’s shameful is that they are being given jobs such as being a nanny where they are the mother figure the entire day while the children’s biological mothers are at work.  It’s understandable to want to do your best and provide the best kind of life you possibly can for your kids, but it’s torture to have to be a mother figure for someone else’s kids when you can’t even be near your own children for sometimes up to 10 years.  There is such a high demand for child care services performed by Latina immigrants because their labor is cheaper than let’s say, an American citizen.  Also, in the United States both parents usually need to work now, so it puts even more pressure to find people willing to watch their children at a reasonable cost.